skip to main | skip to sidebar

"The EyePal® is a modern adaptation of the century-old peep sight, which most people relate to as a pin hole sight (remember those pin hole camera experiments back in school?). The EyePal® enables you to simultaneously see the target, your front and rear sights — all in focus. 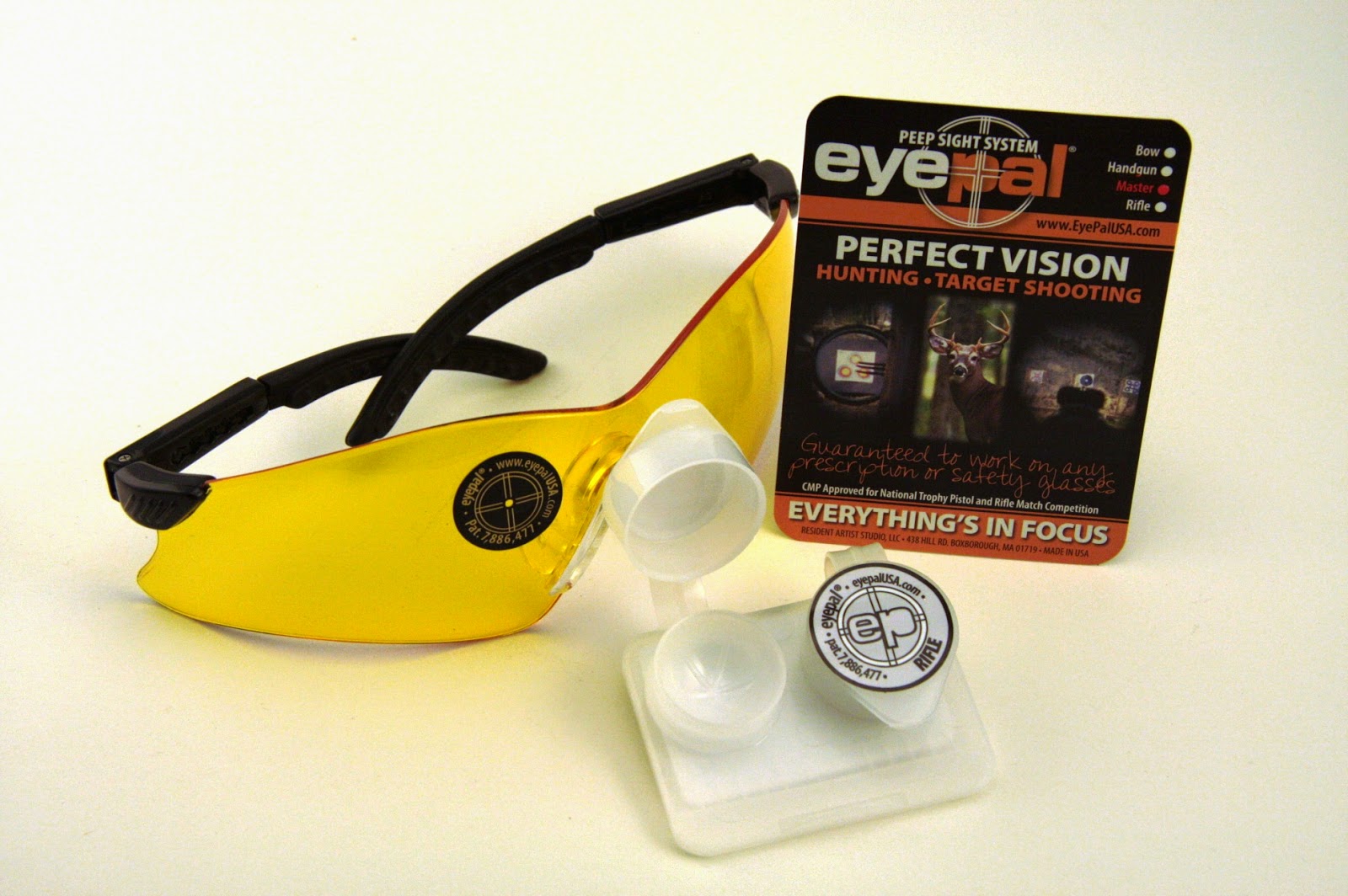 And since it’s made out of a static cling material, it can be easily placed on and off of reading, prescription and safety glasses — without marring the surface or leaving any residue. Compact, lightweight and virtually indestructible, the EyePal® is the ultimate addition to any shooters kit."

I shoot shotguns, rifles, revolvers and pistols with open sights. I've noticed over the years that those sights are not as clear and sharp as they once were. Many of my friends complain of the same problem and they have either gone to telescopic sights, red dot sights, or just quit shooting all together.

When I first read about the EyePal I was skeptical but interested enough to place a call to the company.

I was fortunate enough to make contact with the founder and owner, Charlie Summers. Frankly, I could write an entire article about him, without ever mentioning his product but that's another story in itself.

He told me a bit about how and why he developed the EyePal. He said that as a kid, he was a good shot. 55 years later, he was not. The short version is that he's now a "senior" shooter with poor vision due to several eye problems. Those problems were severe enough that he gave up shooting for a time. After his research & development work with the EyePal, he resumed his shooting career and was able to beat out some of the younger shooters at his club.

The story was good but I wanted to see for myself just how well the EyePal would work. I ordered a set for rifles, a set for handguns and also a "combo pack" that includes one of each. I had some other shooters in mind that I knew would want to try this...if it worked.

In just a few days a small white box arrived containing all the products that I'd ordered and some additional "reading material" about EyePal.

Off to the range a shotgun with iron sights that I use for still target shooting and a pistol with open sights, that I've always had trouble seeing clearly.

It took me a few tries to properly position the EyePal on my shooting glasses so that everything was properly aligned when I formed a cheek weld on my BPS stock. Once that was accomplished, I could clearly see both the front and read sights VERY SHARPLY! It was almost like magic. I took off the EyePal, sights were fuzzy, put it on and they were sharp. I was also able to align the sights in relationship to my 3" circle target at 40 yards much more easily.

Since the EyePal was placed in the upper left portion of my right shooting glasses lens, I could leave it there and have unobstructed vision for normal activities. I fired about 10 shots and then turned to my Ruger P-90.

The Ruger P-90 is a pretty basic .45 self-loading pistol. The sights are certainly not the worst that I've seen but are a long way from the best as well. For whatever reason, I've never felt really comfortable with them but have been reluctant to change them to others that might cost more than I paid for the gun.

I switched to the handgun EyePal and it was much easier to position it than with the rifle model. I just stuck it in the central portion of my right lens and then, after putting up some targets at 25 yards and loading the gun, I ran 2 magazines of shells through the gun.

Just as with the sights on the BPS, the sights on the P-90 were suddenly sharp, clear and very visible. It was very easy to align them with the round bull’s-eye on the target and I shot that gun as well as I've ever shot it. As my confidence increased my groups became tighter and I actually began to like that gun much more than I had previously.

Any complaints? Yes! Where in the world was this thing when I used to shoot handguns competitively?

Seriously, it's a very simple device that just works. It's easy to install and remove and comes in a nifty plastic carrying case that makes it easy to stow in a pocket or a shooting bag.

I use EyePal on a regular basis and would recommend it to anyone who has a problem seeing open sights clearly. By the way, it works as well for a bow shooter as a gun shooter.

You can read more about EyePal by visiting the site listed above and read more "Product Tests" and reviews at http://www.allaboutshooting.com
This article was published on Monday 11 October, 2010.
Posted by EyePal at 7:48 AM No comments: